The session hazy beer I brewed last month turned out rather well.  I'll post a review of the beer and the recipe soon.

Today I'm brewing a lager. I'm a bit late to the party with summer on the wane, but hopefully September will be nice and I'll still be craving a pint of something cold, wet and refreshing.

As is the norm for me it's going to be a small beer, so I guess if it had to be shoehorned into a category, it'll be a light American Lager. The mash is already underway at 63c 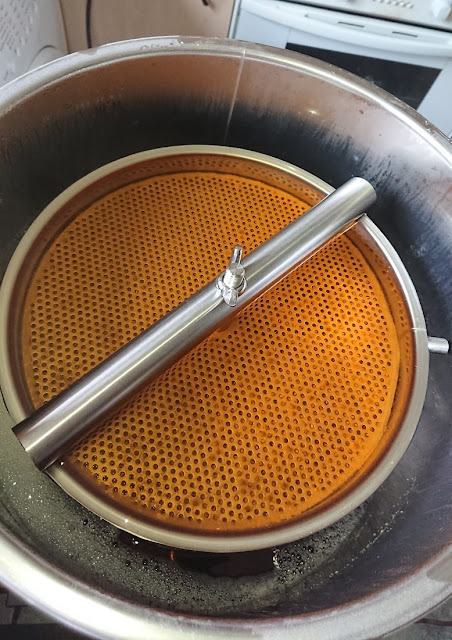 So the recipe for this brew looks like this;

92% Pilsen malt 4% Carahell4% Aromatic maltMash for 55 mins @ 63c / 20 mins @ 67c
80 minute boil with 10g Centennial for 60 minutes
Yeast will be Saflager W-34/70
I'm thinking of pitching @ 15c for a couple of days to ensure the yeast takes off then reducing to 12c for 2 weeks and then lagering as low as I can get for a further 2 weeks.
I'll update on how things went in due course. Have a great brewday if you're brewing this weekend.

My first attempt at a Haysi. Sorry hazy...
I hadn't really thought about it before. But after chatting with someone they commented 'oh you like traditional beers then'. I wouldn't have though of myself as a traditionalist in any form, but maybe that's just the part of my brain that still thinks I'm an 18 year-old punk, when we thought we could change the world.

Brewing wise though, I do like bitters, pale ales, golden ales, IPA's, porters and stouts. Of course not all these beers have to have British hops. American and New World varieties do make it into some of them. However, shoving fruit and lactose into an IPA and calling it a milkshake isn't my idea of beer. So maybe I am a traditionalist.
But I'm out of my comfort zone today. I'm brewing a hazy beer with lots of hops. I guess this makes it a NEIPA. Yes, I've knocked a couple back before, but I've never brewed the style. When homebrewing I like to have a beer that I can return to, time and time again, especially when sharing with friends. I don't want a keg full of a beer that's so in your face you only have one, maybe two before your palate disintegrates and you need to seek out something different. I guess that's why I like session ales.
So why an NEIPA today? Well there's a competition run in conjunction with The Malt Miller so I thought I'd give it a crack. Details here; https://www.themaltmiller.co.uk/blog/verdant-ipa-yeast-home-brewing-competition/
There's sure to be loads of brewers out there that regularly brew NEIPA's so I doubt I'll even get close to winning, but it's an opportunity to brew a different style, so heck, I'm giving it a go. 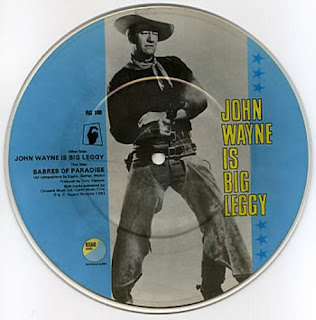 However, so it fits in with my preference for 'sessionability' I'm not going all out to create a massive 6.5% beast with half a ton of hops. I'm looking for a 4.6% number that's still juicy, fresh and hoppy. Again, that might mean it's not exactly the style required to win, but hey - it's me that's got to drink it, so I'll brew it how I damn well like.
If it comes out well I'll post the exact recipe later. As for the title, those of a certain age may remember a song by Haysi Fantayzee called John Wayne Is Big Leggy.
Showdown!
Posted by Mark N at Saturday, July 18, 2020 No comments: 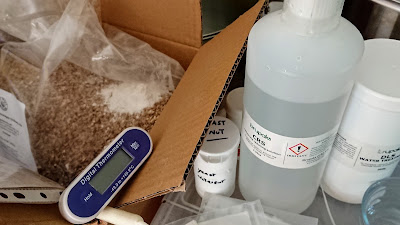 The hops have a higher alpha than the last brew so the quantities/timings are reduced but the intention is to hit  an OG of around 1.036 with around 30 units of bitterness again.
Yeast this time will be Lallemand BRY-97
Brewday is pencilled in for Wednesday June 24th. As usual I'll update this post on the day to report if things went to plan.
EDIT: The day was hot, but drama free. It tool a while to cool the wort, but got it to 20.5c before pitching and put it in the temperature controlled fermenting fridge, where it dropped a bit more and when the yeast krausen started to form it was sitting nicely at 18c. 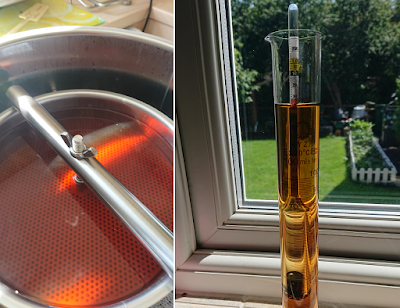 Ordinary by name, ordinary by nature.
Maybe that's  little harsh because this beer is exactly what I set out to achieve. A nice everyday pint you can enjoy all evening, without consequences. It's like a friend you can while away the hours with, without any aggro. No needle, no falling out, just a pleasant time. But then again, nothing too memorable either. 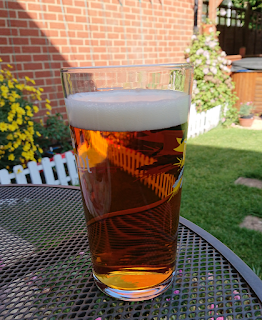 That's not to say I'm not pleased. It's clear as a bell with a nice tight white head (this was from the keg). The earlier pints were slightly hazy, but as always the last few out were stunning to look at. The head dissipated quite quickly but continued to lace the glass on the way down.
The beer is nicely balanced, the body and the colour are ideal, but if I'm being particularly picky, the beer lacks a bit of bite. I was hoping for bit more hoppiness (which can't be a word as I've got a red line beneath that one) to give the impression it's punching above its weight. In reality it's the lightweight that's good in it's division but has no pretensions about stepping it up and mixing it at a different level.
To be fair I did overshoot the gravity, the thin mash in the Braumeister made the extraction very efficient and the beer ended up at 3.9% rather than the expected 3.6%.
There's nothing wrong with a small beer and I'm tempted to brew this again. Maybe with some American or New World hops, but keeping the grist the same, to see if the more feisty hops make a significant difference.
I served this about 8c and it hit really hit the spot after a few garden jobs in the sun. I might make it my next brew with the hops I mentioned substituted - maybe  Galaxy and Simcoe.... Until then Cheers!
Posted by Mark N at Monday, June 08, 2020 No comments:

The Oxford Companion to Beer definition of Grist:

Grist or “ground grist” refers to malt and cereal that is ground (milled) in the brewhouse by a malt mill at the beginning of the brewing process. The term “grist” is also used to refer to the “grain bill” of a beer or the cereal part of the recipe. Therefore, a brewer may refer to a beer “brewed from a grist containing 90% pale malt and 10% crystal malt.”
It also happens to rhyme quite nicely. 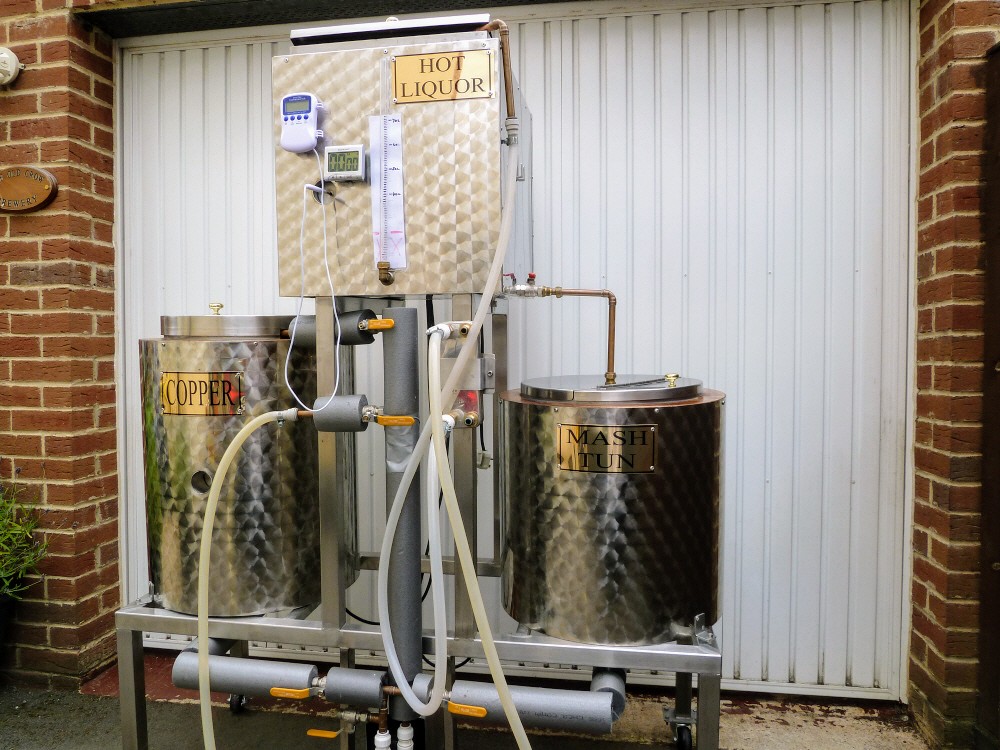 Mark N
Becoming obsessive with the simple alchemy that converts water, barley, hops and yeast, into the world's most loved drink. And as with most things in life, I'm not easily pleased.